Cheetah are sadly one of many species classified as vulnerable on the IUCN Red list.

With approximately only 140 cheetah in the Kruger National Park, having a cheetah sighting is a very special sighting.

Most people know that cheetah are the fastest mammal on earth, to see them in action on the hunt is truly spectacular.

We had the privilege of watching a coalition of 4 males on the hunt.   We were on the S25, close to the Biyamiti bridge, we saw them from the road, relaxing on the river bed below. 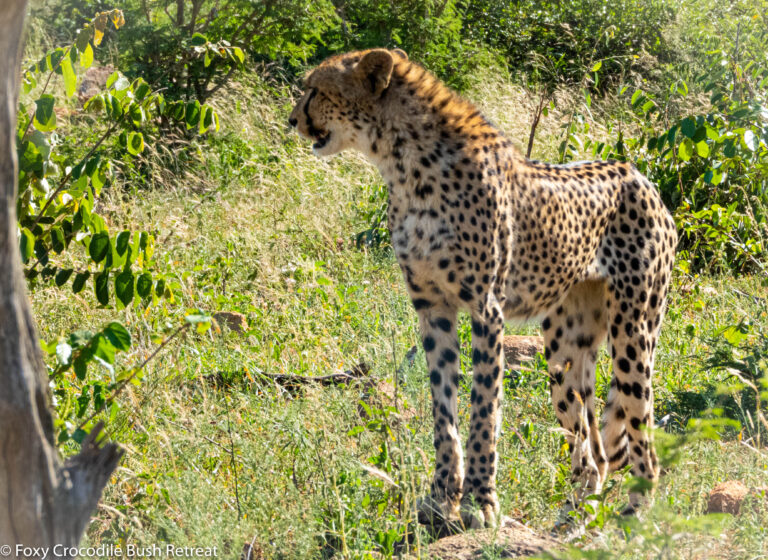 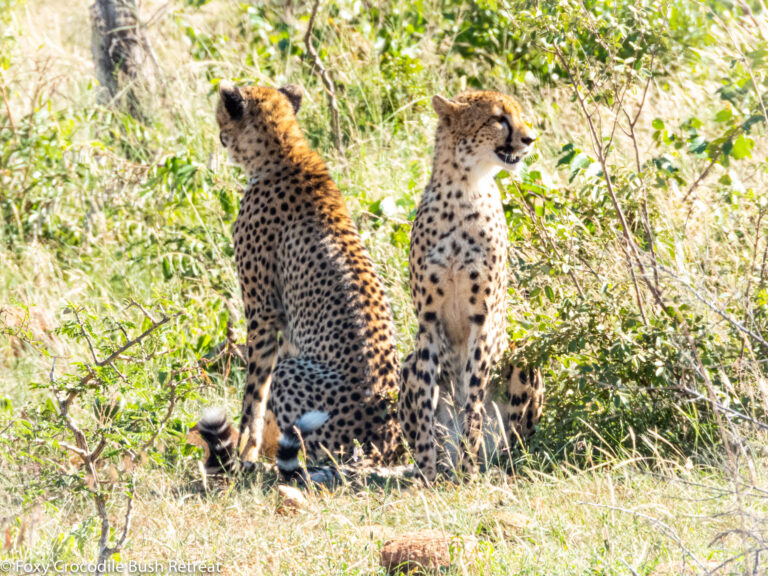 Knowing many of our best sightings are patience driven and it was a good time of the day for them to potentially hunt, we sat for a while to see if they would get into action.  We didn’t have to wait for long before they got up, with more luck on our side, they headed up the riverbed embankment towards us.

They crossed the road in front of us, their prey – impala,were spotted and off they went.  Their coordinated and high speed hunting was impressive but unfortunately unsuccessful.   We think that an elephant got in their way, and that is why they weren’t successful.

We saw the elephant walking with authority down a slight embankment from where they took chase, and then behind our open safari vehicle.  On the other side a hyena appeared, took a brief interest and then disappeared.

Three of the cheetah met up with each other and were looking and calling for their brother.  Seeing their concern for their brother was truly heartwarming.  It was a reminder and another lesson from nature of how much humans could learn from animals to be a better species.  A few minutes passed and their brother appeared on the opposite side of the road. 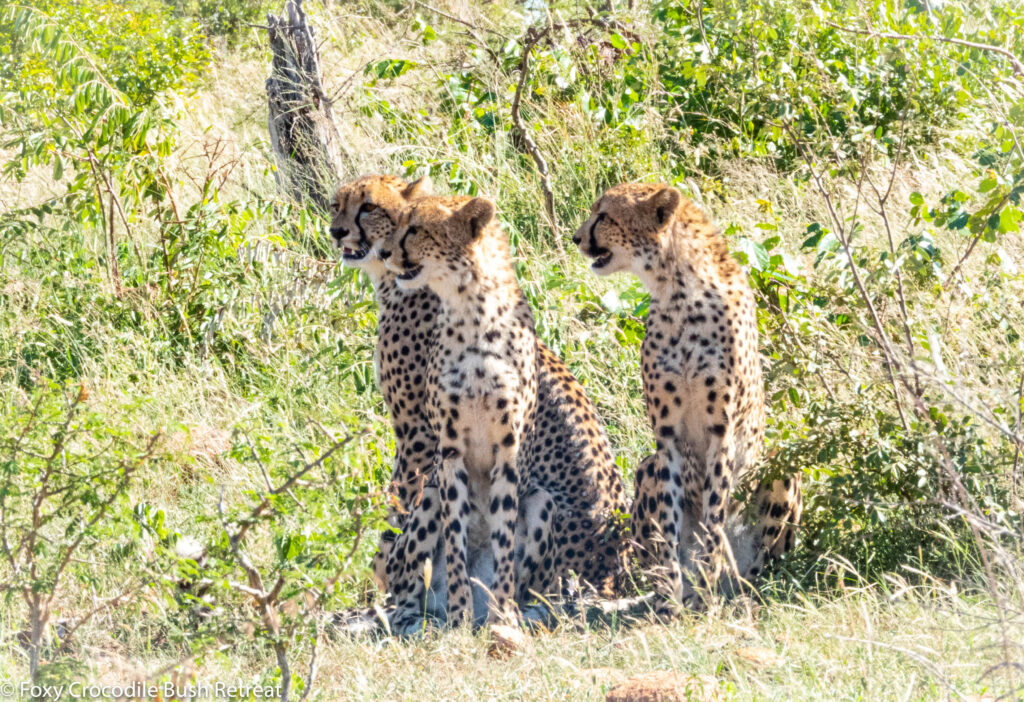 The three cheetah ambled towards him and then they all headed together back to the river bed, where they regained strength to hunt again.  We weren’t able to see if their second hunt was successful, it was too deep in the bush. We hope they were successful and more so that they prosper for a long time. 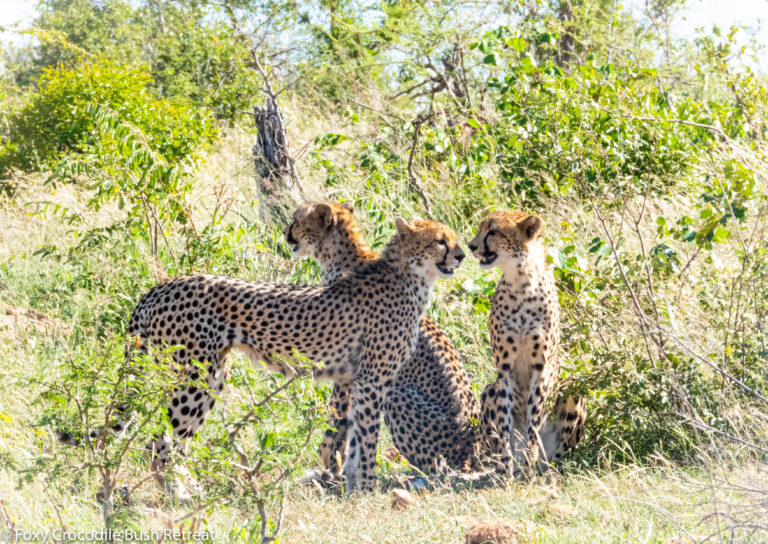 The excited and anxious screeching grew louder and louder as we approached the island. It was known as Marshall or Chimp island by the locals.

With haste, the chimpanzees headed towards the boat.   Their caregivers cautioned us that we were not familiar faces – so we should wait in the boat while they got out to feed the chimps and to give them water.

It would have been a bucket list sighting had these chimps spent their entire lives in the wild, but that was not their history.  Their previous home was a Biomedical research lab – owned by the New York Blood Center.  The research began in the mid 1970’s.  Their test subjects stolen from the wild in Liberia.  For, approximately  thirty years their fate was being test subjects for various diseases mostly hepatitis. About 400 chimps died during that time. 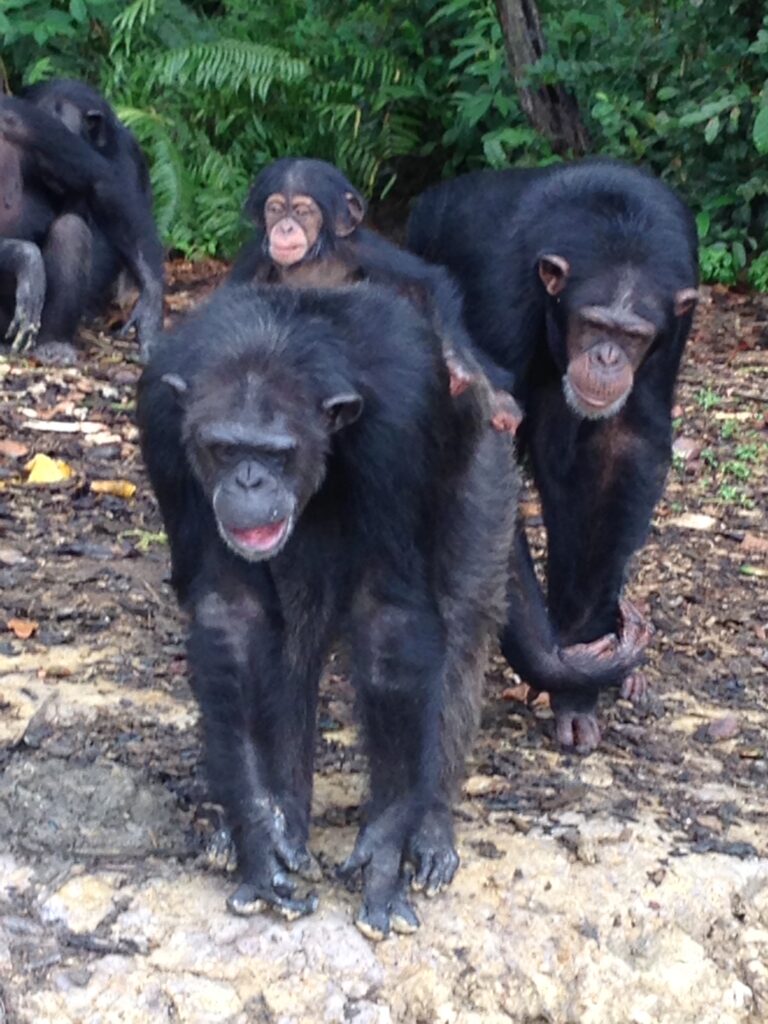 The exploitation and cruelty caught the attention of animal activists questioning how they could subject such intelligent sentient beings to such cruelty and exploitation.   In 2016 their horror came to an end.   The decision was to send them to the six islands spread across a river estuary.   Because chimpanzees cannot swim, it seemed like their best solution. They were divided into groups of about 8/10 chimps on each island.  These chimpanzees would never be able to go back to the wild because they had diseases inflicted on them for the research.

Chimpanzees are humans closest relative – sharing 98.6% DNA.  Chimpanzees have complex social lives and share our emotions too.  Young chimpanzees even love to be tickled, just like human youngsters.

The memory of the sound of a baby chimpanzee’s ticklish laugh is close to my heart.  Mark and I had rescued a baby chimpanzee a few months earlier.  Two days before our visit to Chimp island the orphaned chimpanzee that we rescued was on a journey to a wonderful chimpanzee sanctuary.    She was a victim of the bush meat trade; she was one of the “lucky” victims.  Others aren’t so lucky, their captives don’t feed them or give them milk, they often get injured or killed when captured because their families are killed while trying to protect the baby.  On average 8 to 10 chimps are killed for every orphaned chimpanzee.

The island that we stopped at was one of 3 islands for the day.  Their caregivers went by boat every day to feed them. At the time their food and care, was financed by The New York Blood Center.  A cost of approximately 20 000 dollars a month.  Three of their caregivers took us to the islands by boat packed with food and water for the chimps.  Each of them very caring and devoted caregivers.  Each of them with their own sad history having witnessed the worst of humanity during a brutal civil war. The primary caregiver for the chimpanzees was Joseph Thomas. Joseph had been caring for the chimps for over 30 years. 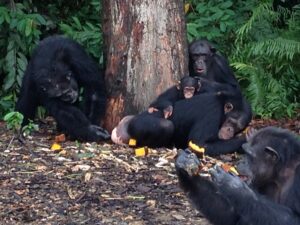 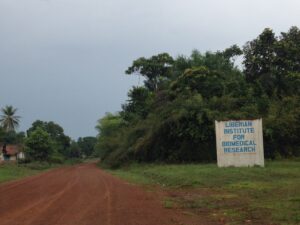 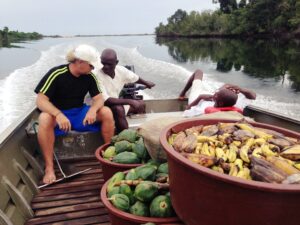 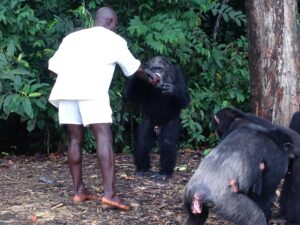 It was a bitter, sweet experience watching the chimps being fed by the caregivers. A couple of chimps had babies on their backs.  The cutest of babies.  Those babies were never meant to have been born.  The females were given contraceptives, I am not sure whether it is was improper birth control, but some babies were born on the islands.  I remember thinking at least they would never be subjected to being test subjects for humans, spending their lives in cages. Little did I know that the chimpanzees had another challenging time ahead of them from the very same organization that exploited them.

A few months after we arrived back in South Africa,we heard that the New York Blood Center (NYBC) had terminated their care for the chimps.  Their abandonment meant that the chimps were left to die of starvation. There was no fresh, drinkable water or food on the island.  They put the responsibility on the Liberian government.  A country that was economically crippled and in the middle of an Ebola pandemic crisis that had escalated.  Word came in that Joseph and his team were scrambling with what little funds they had to buy fresh food from the locals.  Joseph then got hold of some expats to help him, the Humane Society of United States were contacted and they got involved.

Animal activists around the world heard about the desertion of the chimpanzees by the NYBC and took action.  An NGO that profited millions of Dollars piloted by wealthy directors living in opulence stood firm on their decision to renege their responsibility. Blinded by their greed they didn’t see the defiance of their decision brewing.  For two years animal activists relentlessly picketed outside their New York Building, and their personal homes.  Social media put major pressure on the NYBC to reinstate funding, as well as the NYBC’s sponsors.   That did the trick. Companies like IBM didn’t approve of their desertion of the chimps and their association could have caused their reputation harm.  It took two years for VICTORY.

The visit to the island that day is a true reflection of our world and humans.  One that I hope will encourage some humans to make better, kinder decisions in life. To leave the world a better place, to leave a legacy of giving back instead of accumulating things.  The wealthy individuals that financially benefitted from the exploitation of the chimpanzees will leave behind fancy cars and houses.  But those who devoted their lives for the wellbeing of the chimps with little material gain will leave behind a legacy of love forever.

Joseph Thomas vowed to take care of the chimps until he was no longer able to.  He honored that vow. Joseph sadly passed away recently, but what he left behind was a legacy that is difficult to match – compassion, kindness, devotion, generosity and being humble.  A champion for chimps.

Chimpanzees are not indigenous to South Africa, but like so many animals they are critically endangered.  With deforestation, disease and the bushmeat trade chimpanzees could be gone from the wild in as little as ten years.  We all need to care for our planet.  We need to support the selfless champions on the ground rescuing and rehabilitating animals.

There have been victories – an incredible couple from America started a chimpanzee sanctuary in Liberia called Liberia Chimpanzee Rescue.  Together with the Liberian Forestry Development authorities they are making a huge, positive difference.

Missy the chimpanzee we rescued is thriving in the wonderful chimp sanctuary – Chimpanzee Conservation Center/Project Primates in Guinea.

For more info on wonderful champions of chimpanzees – follow my facebook page – For Missy and her chimp friends. 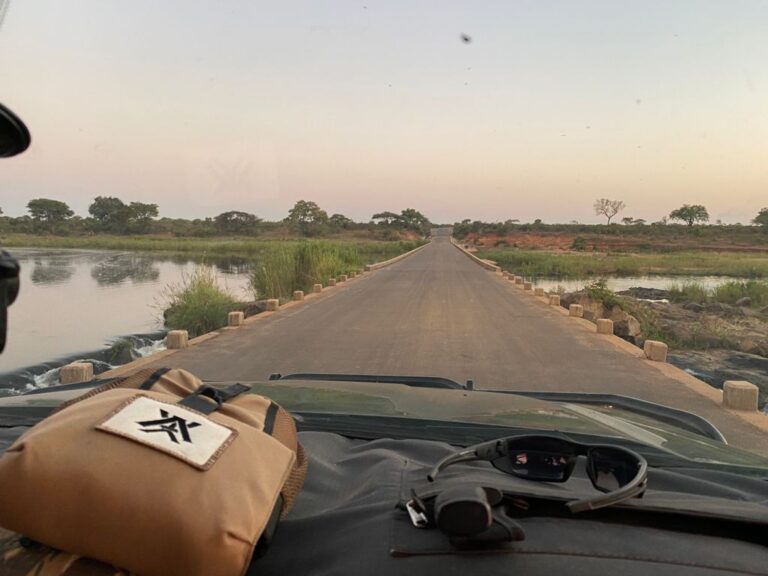 The open safari looked like a UNICEF cargo vehicle almost, not many clothes packed, but lots of beverages and snacks packed, not for survival but to ensure that we would be able to spend every minute of the opening times of the Kruger without having to stop. The beverages weren’t enough – the wonderful hot sunny days required us to quench our thirst with many litres of water and beverages.

Cameras were ready and our excitement remained from the entrance from Crocodile bridge gate… and only subsided when we drove out again when we left after our 6 nights in the Kruger.